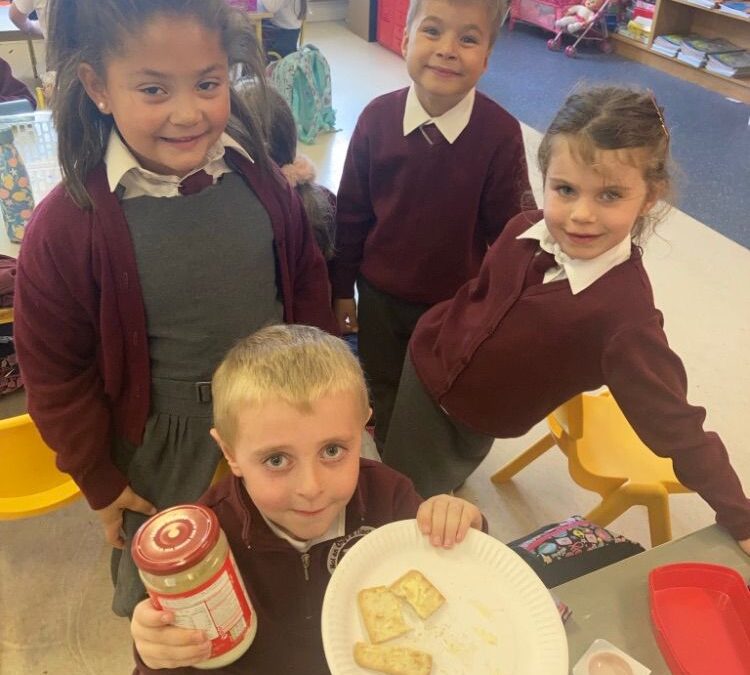 All the classes in Killoughteen N.S engaged with plenty of science, technology, engineering and mathematics activities during term 1 of this school year. Junior infants got their first taste of engineering when they covered the theme of ‘Houses and Homes’ in November. Juniors listened to and sequenced the story of ‘The Three Little Pigs’. They heard about how only one house was strong enough to stay standing when the wolf huffed and puffed. The children were given straw, sticks and bricks and had to try to build houses that would not fall down when Miss Sweeney came around to blow them down in her big bad wolf mask!

Senior Infants took on a very big task and made butter with Miss Ruddle. They had been learning lots about the farm and during their play time they had been engaging in roleplay at the famer’s market. The seniors were given cream in a glass jar with a lid. The pupils gave some ideas on how they would turn the cream into butter and made predictions on which method would work best. The children shook the cream in the jar and it soon turned into butter. Seniors were tired after all their shaking but they got to sit down and enjoy some crackers and homemade butter.

1st class were hoping for snow at winter time but it never arrived, so they decided to make their own ice crystals with Mr. Carmody. They mixed salt and water and put their pipe cleaners into the mixture. They then waited for their crystals to form, checking them each day and recording their results.

3rd class made their very own lava lamps with Mr. Keoghan during science week. 3rd class mixed water, oil and a seltzer tablet. They then chose the colour for their lava lamp and added their food colouring. 3rd class brought their lava lamps home to show their families. 3rd class also worked very hard until Christmas on the STEPS Engineering project. An engineer then visited 3rd class and had a look at the brilliant projects they had been working on. The innovative ideas included a dog food dispenser that can be controlled by an app on your phone, an electronic support dog for people with sight impairments and blindness, a clothes shop scanner to scan your body measurements for clothes fittings and finally a robot that can provide patients with water and food in hospitals.

4th class also had a visit from an engineer whilst engaging in the STEPS Engineering Project. The children had a showcase and displayed the amazing projects they had worked on since September 2021. They had made a washing machine separator, recycling tunnels, a solar powered electric car, a house cleaning robot and a rubbish bin compactor. 4th class showed amazing imagination and even better work ethic while doing this project.

6th class researched tall structures around the world. They read information about the Burj Khalifa which is a skyscraper in Dubai, with a total height of 829.8m. 6th class then discussed how they could make a tall structure that would be stable enough to stay standing. The children planned out their towers, were given marshmallows and spaghetti and they set off to work in groups. They made some very impressive towers with limited building materials and showed great teamwork skills.

No doubt the children in K.N.S will get to try lots of fun new activities throughout the year! 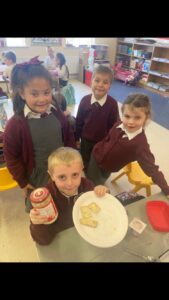 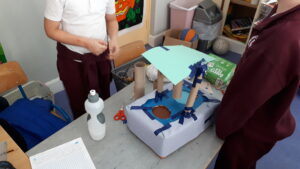 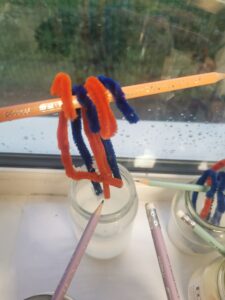 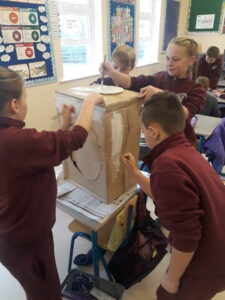